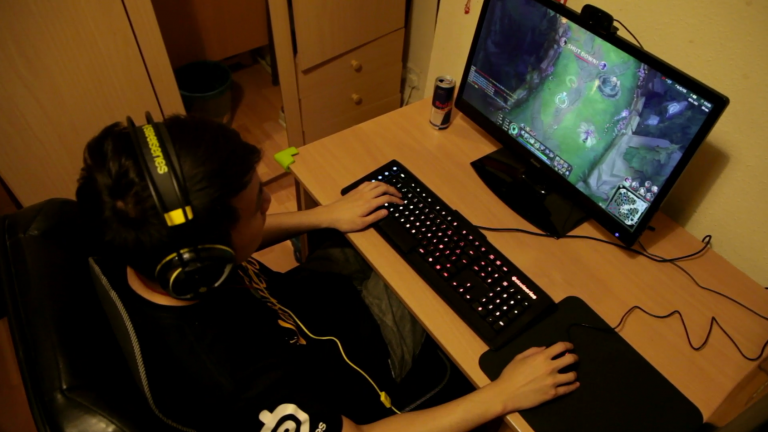 My job is to try and make a difference to the League of Legends player and wider community, he says. “I work in a publishing office in Oceania, where I’m not told what to do by my Manager. I’m simply entrusted to make a difference; it’s then up to the local team to decide what direction we should take.”

For Ivan and his team, making a difference means tackling one of the biggest issues facing the gaming world today: How do you educate young players about good online behavior?

Riot Games has long been a proponent of sportsmanship. With across the globe, League of Legends is the biggest game in the industry. Because of its intensely competitive nature, it has become known for its sometimes heated atmosphere. Players are expected to abide by the , a comprehensive guide to being a good team player.

League of Legends in action

Despite encouraging the Summoner’s Code and being at the forefront of , Ivan notes that “At times, it’s felt like we could do more. Video games are a fundamental reflection of humanity: how we learn, how we interact, how we come to understand our world. We all “play” throughout our lives in some capacity or another. Video games just provide a particular sandbox… the reason they work so well is because of these parallels. The social and competitive nature of League of Legends taps into human fundamentals.”

Last year, Ivan and his team started to wonder what they could do outside of the in-game experience to positively shape player behavior. They realized that it’s not just the gaming industry that isn’t doing enough — it’s also the education sector. Students are online every day, at school and at home, and yet schools are doing very little to teach students about acceptable online behavior.

“Some schools don’t do enough to set students up for an online future. I’ve heard a number of schools hire an external speaker to talk to their students about cyberbullying. This talk may happen once a year purely to tick a box; a curriculum standard has been met, and online etiquette is not considered a priority for another year.” Ivan says.

“Teachers and the education sector have been slow to respond to this online world and setting students up for a future of online activity. The education sector is meant to set you up for life and at the moment not enough is being done to ensure online educational needs are being met.”

It’s all about sportsmanship

In 2016 Ivan and his team created — an initiative that is now spreading across Australia and New Zealand. Like other after-school clubs (think AV, drama, or Model UN), League of Legends clubs are led by a dedicated teacher. Under the teacher’s supervision, students play League of Legends in groups at school and even participate in championship tournaments against other schools.

To help students understand and follow the Summoner’s Code, Ivan and his team have outlined , which teachers and students discuss before, during, and after a game.

“A League of Legends High School Club is intended to promote authentic, relatable learning experiences,” Ivan says. “It provides an opportunity for students to explore and model the key values that exist in schools and in the curriculum. We’ve chosen to focus on sportsmanship and have provided a code of acceptable behavior for players to abide by in their pursuit of fair play.”

Ivan and his team haven’t just worked diligently to promote the clubs — they’ve also built a remarkable set of structured around the “” framework. Popular in the UK and Australia, “Assessment for Learning” emphasizes ongoing review and adjustment based on each student’s unique needs. Teaching materials include everything from discussion cards and self-evaluation sheets to essential information for school IT departments.

“We need to meet students where they are, and the more the education sector supports what we’re doing, the more likely we can collectively make a difference.”

This connection to the tenets of education is no accident — it’s a particularly brilliant choice on the part of Ivan and his team. As he says, “The resources align with the national curriculum and , an initiative in Oceania which many schools are looking to roll out. League of Legends High School Clubs is one way of implementing these initiatives.”

The exciting news is that the clubs have a real effect on kids — and not just on their online behavior.

“A year ago, we had this hypothesis that League of Legends could teach right from wrong,” he says. “A club led by a dedicated Teacher can definitely provide those opportunities. Not only have Teachers seen students adopting sportsmanlike characteristics, which has led to outcomes like effective communication and leadership, but some Teachers are now starting to see this transfer out of the League of Legends High School clubs and into the wider school curriculum.”

In addition to the existing 30 schools participating in clubs, Ivan did a professional development session last year to 26 teachers in Perth. As of July 2017, he has spoken to 130 different teachers across Oceania, and he’s eager to meet with more.

In the future, he hopes to expand the program throughout Oceania, adding more schools, teachers, and students to the already-growing list of participants. Not only that, he hopes that the education departments in Australia and New Zealand will soon recognize the benefits of the program — and potentially change the way they teach online etiquette to kids.

Why early digital education is crucial

“This is the place to teach online behavior,” Ivan says of high school. “I’ve always seen the education sector as a critical evolution point for young people. As teens begin to explore and experiment with the online world, we must think about how we can best support them on this journey. Let’s not shift the responsibility onto someone else or hope that they will learn online skills themselves.”

He hopes that the success of the project will send a strong signal to the world — that it’s time we tackle the problem of toxic online behavior. “This whole notion of ‘We’re going to wrap kids up in cotton wool. We’re going to remove them from the internet,’ is not an effective solution,” he cautions.

“Our children and our students look to us to set expectations of what good behavior looks like.”

“What we have to do is meet them on their chosen journey and be prepared to walk alongside them, side by side, step by step. As parents and teachers, we need to allow students to inevitably trip up or fall, and as they do we should be prepared and able to provide support and guidance. We should help them to make sense of what happened and why, and then encourage them to continue walking until they are skilled enough to walk on their own.”

It’s clear that the time for early education is now. The Pew Research Center’s reports that 40% of Americans have experienced online harassment, while 62% consider harassment a major problem. As Ivan points out, these numbers highlight just how serious the problem is. The clubs are only the first step.

The future is now

“We, as adults, educators, and teachers have to be prepared to act,” Ivan says. “Our children and our students look to us to set expectations of what good behavior looks like, and if we can’t find the courage, time or dedication to step up and make a difference — what hope does the next generation have? Now is the time for change. The future we hope for won’t exist unless we do something about the now.”

“This is the place to teach online behavior,” Ivan says of high school. “I’ve always seen the education sector as a critical evolution point for young people.”

He’s hopeful for the future. “This is a hot topic of conversation. I spoke to three teachers yesterday, and I’m speaking to two more today.”

He adds, “I believe in a broad and balanced education system which embraces diversity and new opportunities that enhance understanding and student learning. We spend time on the things we care about, and the same goes for today’s students, many of whom are already invested in a digital world.

We need to meet students where they are, and the more the education sector supports what we’re doing, the more likely we can collectively make a difference.”

Find out more about sportsmanship and League of Legends High School Clubs on their . Don’t forget to download their fantastic Teacher’s Resources .

Interested in starting a club at your school? Find out .